The importance of simple chores for kids

Participating in simple chores, whether it’s around the home, when living with grandparents or family as part of family homecare support, or in a Bethesda daycare center, is critical for young kids. While these might certainly help family and the caregivers, they’re also good for the child’s character. In the process, kids learn invaluable skills they’ll need as adults, like putting away dishes, tidying-up their rooms, or preparing meals. In this post, we’ll discuss the importance of simple tasks for kids, and talk about how adults can get young children started on doing some of those tasks.

The Value of Simple Chores

It’s true, that children learn how to do “adult chores” when they’re encouraged to take them on at a young age. Toddlers can put toys away; preschoolers may help putting away groceries; school-age kids can vacuum carpets or sweep floors; and older kids can oversee younger siblings or other kids in the group. But there’s more value to chore delegation than just aiming for knowledge transference. As children participate in these tasks, they:

These are values that go beyond simply equipping young children with skills to cook, clean, and groom themselves. More importantly, as a result of taking on simple chores, these values ingrain themselves into a child’s personality at a young age. Subsequently, as they move through various stages of life, from daycare to elementary school, and from there to higher learning facilities and the workforce, the skills and values they embraced early on in life will serve them well.

Motivation – The Key to Getting Kids Involved

Adults, especially on the home scene, are typically tired and exhausted after a full day at work. More often than not, it’s so tempting to just “order” a child to do simple chores around the home – like tidying their play space. It’s easy…and very effective because it gets immediate results. If you are a parent or caregiver, and are tempted to take that route – Don’t do it!

As humans, our instinct is always to either fear or resist bullies (or perceived ones!) – and it’s no different with youngsters. As adults with influence on young children, Bethesda preschool staff know the harm that fear and resistance can have on motivating young kids to model good behavior. Both resistance and fear will ingrain a deep distrust in the desired result – which is to get the child to participate in a chore of their own volution.

The best way to motivate a child to taking ownership of simple chores, is to get them to adopt those chores as their own. Whether it’s making their beds as they wake up, putting away the laundry, or making sure their younger sibling’s school backpacks are packed and ready to go by 7:30 AM – if a kid feels responsible for that chore, it’s more likely they’ll make it part of their routine.

Instilling fear, or bullying kids into submission, might work for a while. Then, once the adult is no longer in a supervisory position, or the fear wears off, young children will lapse into disowning the chore. Even if it’s done, the outcomes will likely be less than desirable – lunch boxes missing from backpacks, or bed covering done, but in a messy way!

So, how do parents and caregivers motivate young kids to understand the importance of their chores, and motivate them to take on those tasks diligently? At Bethesda elementary school in MD, school administrators, trained teachers, and support staff know the importance that good communication and constant encouragement plays in the motivation process. Parents and home caregivers can model that approach by following these guidelines:

Motivation, during the assignment of tasks, ensures everyone understands the importance of their chores, and appreciates their role in performing them. Whether it’s at a Bethesda daycare center, or around the dinner table at home, discussing the consequences of someone not doing their assigned chores, can also serve as an important motivational force: “Jane, you realize that if school lunches aren’t ready for 7:30 AM, it can delay everyone from getting to school on time”; or “Tommy, someone can trip on the books if you don’t put them away everyday before going to bed”. 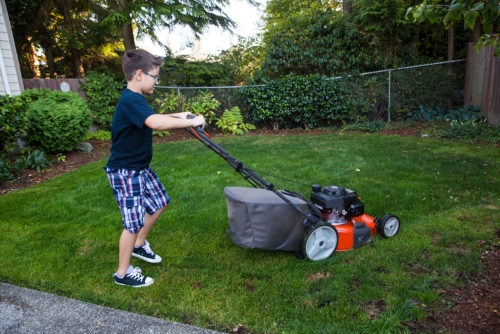 The importance of kids doing simple chores can’t be underscored as a “one and done” job. Parents, caregivers, and teachers must continually oversee and inject motivation into the process until the chores become second nature to the child. Here are some strategies to make that happen:

There’s also another side to executing the strategies in the playbook – feedback and correction. Often, when adults assign simple chores to kids, like putting away the dishes, or helping younger siblings get ready for school, we view them as “simple” from an adult lens. To a kid though, even those basic tasks might be daunting. And that’s why it’s important to only assign age-appropriate, and skill-relevant, chores to each child.

Adult supervision of chores has its limits. Sooner or later, adults move on to chores of their own, leaving young kids to continue with their designated tasks. But, as staff at Bethesda elementary school in MD will testify however, invariably, even the most motivated child makes mistakes. And that’s where feedback and correction loops play a critical role in helping children realize the full potential of doing chores.

When kids do make errors when doing their chores, rather than launching into a tirade about what they did wrong, it’s often more rewarding – for adults and the kids too! – to lead with the good they’ve done: “Tommy, I see you’ve put all the books back into the shelf – That’s really great!”. Now, for the constructive critique: “It would really be great if you could put the drawing books and supplies on lower shelves. That way, younger kids can get to them without asking someone to pull bring them down”.

The positive feedback gives Tommy a sense of accomplishment – even though this was a relatively simple task. It’ll help build his morale, and strengthen his sense of participation in the home or the environment in which the tasks are performed. But the critique also plays a vital role in helping him do better, the next time he does his assigned chore.

While gold stars and praise are invaluable in making kids understand the importance of doing their chores, they may not be enough. It’s always good to also reward kids with other forms of gifts and treats, so they can link task-doing diligence with “real world” rewards. For instance, a pre-set allowance, a favorite snack, or more supervised time at the TV or online.

MCCA has been recognized by the Maryland State Legislature for its commitment to Montgomery County issued a quality programs and special needs child care Proclamation in 2016 to MCCA for its commitment to Montgomery County child care for more than 50 years. MCCA was also selected as a 2018 nonprofit finalist for a MOXIE Award for boldness and innovation

MCCA is the oldest nonprofit licensed child care provider in Montgomery County and started its work in 1968 as a Community Action Project of the War on Poverty. Recognizing the need for quality child care programs in their neighborhoods, a group of local activists formed an association to establish centers in Montgomery County that would serve a diverse population and establish high standards for child care. Now, more than 50 years later, MCCA’s dedicated and expertly trained staff continue their tradition of providing high quality child care and play-based education for children.

Families with school aged children who can afford their child care expenses during the school year often struggle to afford the all-day programs they need when school is out for the summer. The Richard Krampf Summer Adventures Scholarship Fund was established to help provide children a safe and stimulating place to spend their weeks when school is out. Please contact an MCCA Director for details on how to apply.